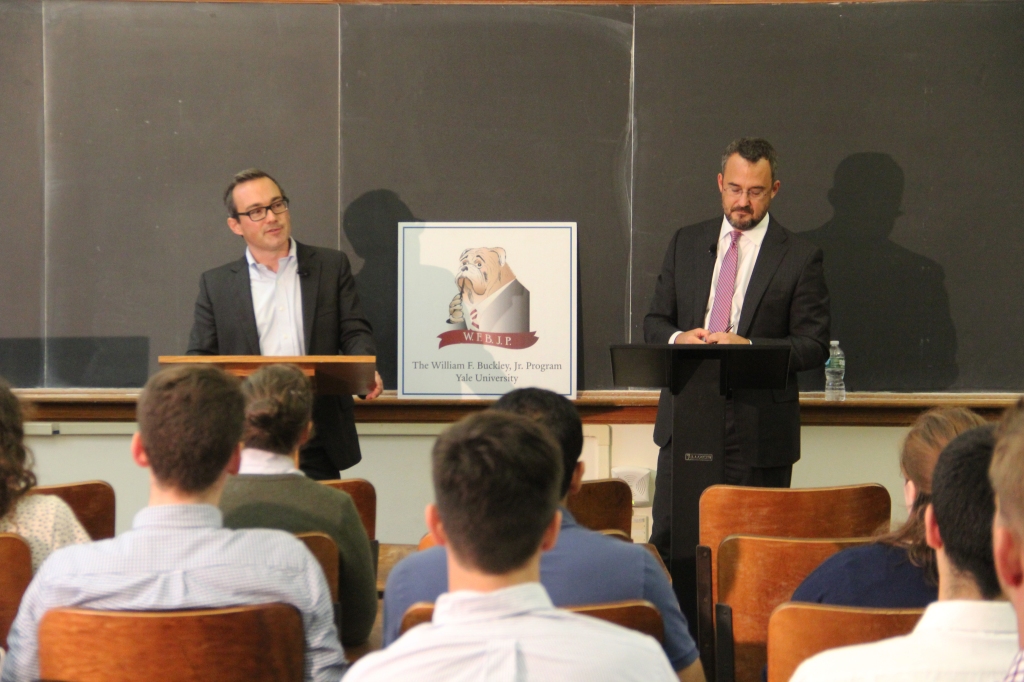 On Friday, September 21, 2018, the Buckely Program hosted Joseph Blocher and the Clark Neily for a Firing Line debate on gun control.  Joseph Blocher is a Professor of Law at Duke University and a graduate of Yale Law School. He focuses primarily on Second Amendment law and legal history. Mr. Blocher provided much of the legal thinking behind the D.C. government’s argument that their handgun ban was constitutional in the landmark Supreme Court case D.C. v. Heller. Clark Neily is the Vice President for Criminal Justice at the Cato Institute and served as co-counsel to the plaintiff in Heller.

First, a formality, I recognize the elephant in the room: a “Firing Line” debate on gun control… it is hardly subtle. Indeed, given our present political climate, the proposition seems rife with peril. Invite Professor Joseph Blocher, who helped draft Washington, D.C.’s argument in defense of the handgun ban overturned in D.C. v. Heller, and the Cato Institute’s Mr. Clark Neily, plaintiff’s counsel in the same case—two leading legal voices on one of the most politically contentious topics today—and the Buckley Program might as well have countenanced a duel.

Accordingly, when I sat down across from Messrs. Blocher and Neily for our pre-debate interviews, I came loaded for bear. I was prepared to probe both sides of the decision in Heller and cover the well-trodden ground of Second Amendment interpretation. From the very beginning, however, it was clear that these two intellectuals refused to succumb to the lesser angels of our present politics. Though their legal positions in Heller might have been antithetical, the two began their interviews, conducted separately, expressing a nearly identical sentiment: litigation is not the solution.

“I think that everyone should accept the precedent as it stands….” If this opening concession from D.C.’s advocate was surprising, Mr. Neily’s was just as telling: “Up until this point, and to a pretty high degree of certainty going forward, judicial protection of gun rights has been trivial.” The two, that is, now agree on a fundamental point. The Second Amendment protects the personal right to keep and bear arms, and the courts are highly reluctant to carve out Second Amendment protections beyond that central holding.

The reality of judicial non-intervention in Second Amendment jurisprudence may very well result from Professor Blocher’s assertion that “It was a closer decision than people on either side would like to admit.” Recognizing this situation, and fearing the potential political backlash historically associated with holding large portions of party platforms unconstitutional (see e.g. Dred Scott v. Sandford and more recently Roe v. Wade), the courts may very well be reluctant to take too active a role. Indeed, while proposals for Australian-style gun buybacks may run rampant on Ivy League campuses, both Professor Blocher and Mr. Neily agreed that the majority of gun control advocates have accepted the premise behind Heller and have adapted their proposals accordingly. As Professor Blocher put it, “[Heller] is not antithetical to the Democratic Party in the way Roe has been to the Republican Party.”

Professor Blocher called for the courts to develop a more robust Second Amendment doctrine to help draw out some of the vagaries of Justice Scalia’s opinion. Namely, he hoped for more clarity in parsing the “common use” test—hinging protection on a firearm’s “common use” in society. He suggested drawing on the three-pronged Miller Test from obscenity doctrine for guidance. But ultimately, with the courts’ reluctance to test the bounds of the political acceptance of Heller, both men turned their sights to the realm of policy.

Though maintaining that he held little hope of altering his opposition’s underlying opinions about firearms, Mr. Neily seemed armed with facts tailored to create political common ground. He emphasized the disproportionate enforcement of gun regulations against African-Americans. “47.3% of federal gun convictions are African Americans, which is a greater racial disparity than with drugs,” an outcome of a criminal justice system in which “African Americans are arrested for gun crimes at a rate five times that of whites, [and receive much harsher penalties] when they are prosecuted.”

These disparities represent a cruel irony considering that the inability of African-Americans to trust their own defense to the state in the Reconstruction South played a key role in solidifying the conception of a personal right to keep and bear arms outside of militia service. Yet, Professor Blocher stressed that African-Americans, often living in the communities most heavily impacted by gun violence, are among the most likely to support stricter gun laws. Nevertheless, he decried what he considers a false dichotomy between those who support the Second Amendment and those who advocate for gun control.

Contending on opposite sides of D.C. v. Heller,these two accomplished attorneys began from opposing legal positions. When I interviewed them, they made clear that they were intent on marching towards political solutions. Later that evening, they engaged not in an antagonistic debate but rather thoughtful discussion. This “Firing Line,” hosted by the William F. Buckley, Jr. Program, made clear the imperative of civility in political and legal discourse. I encourage all who get the chance to watch the recording of the dialogue posted by the Buckley Program. If I could, I would make it mandatory viewing for my classmates in the law school. If these two former foes can engage in this manner, then surely, the rest of us should aspire to nothing less.

Grant Gabriel is a student at the Yale Law School.