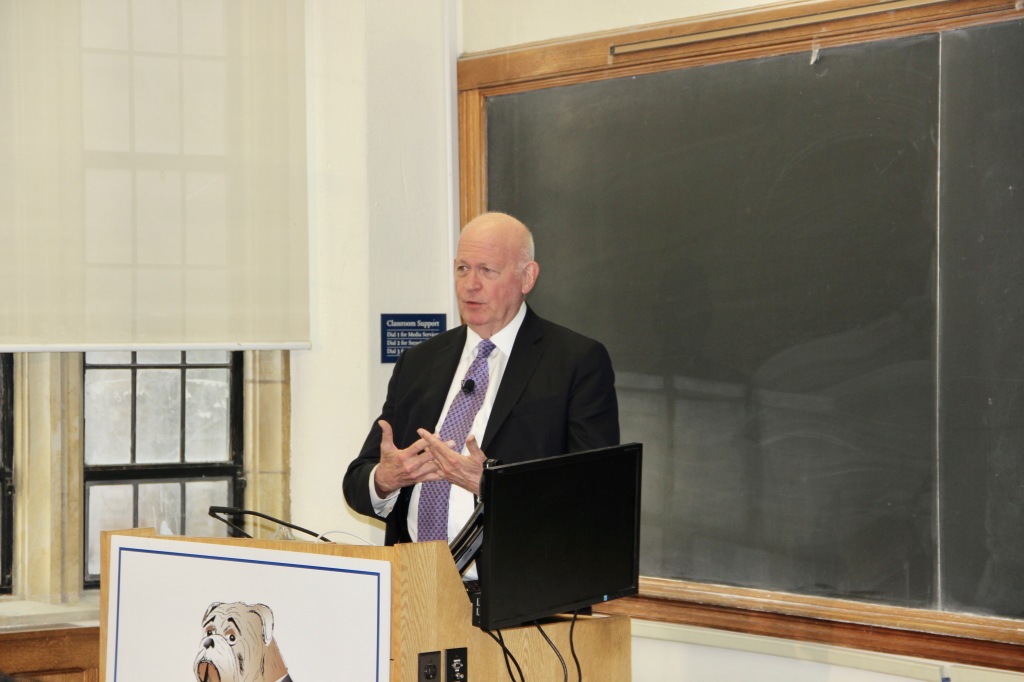 On February 24, 2020, the Buckley Program hosted a public lecture and dinner seminar with Michael Pillsbury on the topic “Assessing Trump’s China Strategy. Dr. Pillsbury is a senior fellow and director for Chinese strategy at the Hudson Institute. He is also a distinguished defense policy adviser, former high-ranking government official, and author of numerous books and reports on China, including The Hundred-Year Marathon: China’s Secret Strategy to Replace America as the Global Superpower. President Trump recently described Mr. Pillsbury as “the leading authority on China.” The transcript of this interview has been lightly edited for clarity.

Charlie Chen: First I just wanted to thank you for coming in and talking to us. My first question is if we’re going at the current pace, China’s economy will eventually overtake America’s, barring a catastrophic collapse of the Chinese government. What do you think the ramifications will be of the Chinese economy’s transition to a service economy, and the impact to the American and global economies as it eventually becomes the largest economy in the world?

Michael Pillsbury: The implications are enormous. The US since 1894 has been the largest economy in the world. It has led to many innovations in world governance, while it is unclear what the Chinese would want to do if they attained the largest economy. Keep the old system, or transition to something new. In the last five years, they have been talking about a new world order, although it is unclear what that may be. I don’t think it’s inevitable that China will surpass us. The American growth rate can be sped up, and the Chinese growth rate can slow down.

CC: Do you think America has an obligation to support human rights and freedom overseas, such as the US Congress passing resolutions in support of Hong Kong, and just general thoughts on that?

MP: For 240 years, the US leaders have believed they should support democracy around the world. The debate has been over what the US should do specifically in a material way overseas, with one extreme that’s existed from the beginning being a John Adams quote that “America does not go overseas to find dragons to slay,” with the other extreme being to use force. Of course, the latter happened in the case of Germany and Japan, with the US military occupying the two and created their system of government in consultation with the Germans and Japanese. In both cases they were successful, with both seventy years later still being democracies, having free market economies, and being allies of the US. So, both sides of the argument have success stories, with the two extremes and then having a range of options in between.

In the Hong Kong debate, you can view the situation through these two lenses, as the US doing nothing or sending in troops to force the Chinese government to respect Hong Kong rights being two extremes. I would say that in this case the US has slanted more towards avoiding direct action and just being a beacon of example, although it has also focused on sticking to the 1984 agreement between the British and the Chinese, and did not press beyond that, as that agreement did not guarantee democracy for Hong Kong, but rather only a 50 year continuation of the Hong Kong system, however it was defined. The problem was, it wasn’t defined. If you read the agreement between Margaret Thatcher and Deng Xiaoping, it’s remarkably vague. It gave a lot of authority to first David Wilson and Chris Patton, the first and second governors of Hong Kong after the agreement. Both had different visions of the Hong Kong system, with Wilson encouraging more interaction with China and Patton pushing for more freedoms and a kind of electoral college. They left conflicting models for the governing of Hong Kong, and left Deng Xiaoping with a lot of leeway in picking which model to use. The Chinese decided on a partial democracy without full freedom for Hong Kong, but what was built into the system was demonstrations, which has happened in the past and which Beijing capitulated twice to. Over time the current system arose, where the city’s resistance to the rule of Beijing has been strengthened.

CC: During the Hong Kong protests, a lot of American talking heads criticized China for violating human rights and freedoms. Do you think the frequent criticisms of China as such as Americans actually caring about human rights in China, if it’s just self-interest? If China becomes a democracy, you could see a potential trajectory in the case of Russia democratizing, where after the USSR collapsed and turned into a democracy, the US did not help it rebuild, but rather bullied it economically and pushed the borders of NATO right to the Russian borders. If China were to become a democracy, do you think the US would treat it any better, given that it’d still be a geopolitical rival?

MP: I wrote my book to criticize the overly-optimistic view that China would ever become a democracy. I personally think if China became a democracy, then I think the potential competition would be less. I think it would be 80% cooperation and 20% competition, as opposed to what seems like the reverse now. This could be an example of the democratic peace theory, but sometimes democracies do go to war with each other.

Bohan Lou: Sometimes democracy doesn’t work out, like Brazil or India. India has even higher levels of corruption and inefficiency than China, although given its cooperation levels with the US are also higher.

MP: my book is really about the governments of China and the US interacting with each other. The purpose is to reveal what’s been going on between the two government between the last 50 years, containing declassified documents, which has been closer than many people realize. I want to increase the level of knowledge about what’s really been a secret relationship with China, with an example being that we sold them six weapons systems for billions of dollars. Our CIA and their equivalent cooperated in many countries to conduct covert action and use force to achieve objectives. Many people are very worried that the US and China won’t go to war, but will rather form a G2, not a G20, where just the two countries will rule the world.

CC: you’re talking about that kind of alliance, but looking at current events, it seems to be going the other way. I’d like to ask about the geopolitical influences of the two, seeing how on the world stage, with the US withdrawing from the TPP and Paris Agreement and China establishing Belt and Road and the AIIB, if Chinese institutions will one day be able to outstrip Western institutions like the IMF and World Bank?

MP: one question is what the Chinese did after China and the US opened up their doors after 1971. China took a look at international governance bodies, such as the World Bank, UN specialized agencies, the IMF. They weren’t a part of any of these bodies and had been attacking them as imperialistic, but Chinese leaders decided to reverse course and to enter the system. Today if you look at many of the said specialized agencies, many of them are run by Chinese citizens, with even more having their second- and third-highest positions also run by Chinese citizens. Rather than condemning the world order, the Chinese reversed it and furthermore decided, to put it bluntly, take it over and run it from the inside. As I discussed in my book, this had the tacit approval of the US as well.

CC: but can you really call this a takeover when the country itself has almost a quarter of the world population? Do you think a country of that size shouldn’t have a say in global institutions?

MP: the question is, what weight the Chinese say should be. If it’s just by population, that means China should control one-quarter of the world governance system, but China’s already surpassed that. China has the largest amount of loans of any country from the World Bank. Chinese economists in the IMF and World Bank have extremely influential roles. Over the course of the past forty years, American politicians wanted this to happen.

CC: But I’m not sure if what you’re saying is completely true, like one of the primary reasons why China even started the AIIB was because in the Asian Development Bank, it was split up into shares, and it held only around 7-9% of the shares, which is beaten out by the US and even Japan. If even if an institution focused on its own region, it has so little representation, then how can you say in the global order it already holds more than a quarter of the sway?

MP: Well, creating the AIIB proves my point, which is that rather than being satisfied with controlling a quarter of the world banking system, China wants to create its own order. The Obama administration actually asked the British and its allies if they could not join, but what happened? They joined anyway. If we continue under the present trends in my book, then the US should join as well, and China is saying that under this new system, that people in the world would be happier, with the hegemonic power of the white male finally ending. The Chinese say that China has been humiliated and abused throughout history, and that it’s time for this bad treatment by the West to end. What I’m also saying in my book is this hasn’t been the case, at least from the 1970s, when the US supported China militarily and economically, and provided them with lots of scientific aid.

CC: But one of the reasons that the US even provided the aid was because the two countries had a common enemy in the form of the USSR, right? And I’m also wondering, if what you say is true and the world order has been so good to China, then why they would want to overthrow it. It seems like from the establishment of their own institutions that they just want to carve out their own space in the existing order.

MP: I wouldn’t use the word overthrow. I would say they’re still in the process of defining what the new world order would look like. Chinese officials and intellectuals in think tanks have been tasked with the CCP to come up with a vision of how to create a more fair and just world for China. So far, they seem to want to keep the current institutions, such as the UN Security Council and specialized agencies, the IMF, the World Bank; they want to keep all that but somehow change it so that it’s more just and fair. And what I discuss in my book is that does the US want this to happen, as China demonizes us in their textbooks and published works, as they are saying unkind things about the country that has helped them grow. This causes me to urge caution, that maybe until the Chinese are more cooperative with us in specific areas, maybe we’ve made a mistake in growing China into a great power when its hostility towards us is higher than we realized.